When you visit any website, that website may store or retrieve information about your browser, especially in the form of cookies. This information may relate to you, your preferences, your device, or it can be used to make the site work as you expect. This information usually doesn't identify you directly, but it allows you to get more personalized online content. In these settings, you can choose not to allow certain types of cookies. Click on the category headings to learn more and change your default settings. However, you should be aware that blocking certain cookies may affect your experience with the site and the services we may offer you.More info

These cookies are necessary to ensure the functionality of the website and cannot be turned off in our systems. They are usually set up only in response to activities you perform that constitute a service-related request, such as setting privacy preferences, signing in, or filling out forms. You can set your browser to block or alert you to such cookies, in which case some parts of the site may not work.

These cookies allow us to determine the number of visits and traffic sources so that we can measure and improve the performance of our site. They help us identify which sites are the most and least popular, and see how many visitors are moving around the site. All information that these cookies collect is aggregated and therefore anonymous. If you do not enable these cookies, we will not know when you visited our site.

History of the faculty 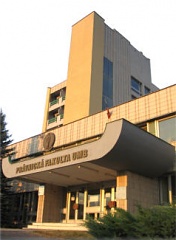 doc. JUDr. Pavel Kandráč, CSc. was given a mandate for executing the function of the dean. He appointed into the functions of vice-deans these persons: Erika Kučerová (for education), Jaroslav Chovanec (for the activities that are connected with science and research and also for the editorial activity) and Vladimír Vaňa (for the development of the faculty). The team of first academic functionaries prepared and secured the successful realisation of admittance exams on faculty. There were admitted 100 students for the internal study in the first academic year of 1995/1996. After passing the first task, the management of faculty finished its action before the opening process of academic year. The dean of the Faculty of Law of UMB appointed the new vice-deans: Július Kováč (for education), Jozef Beňo (for science, research and editorial activity), Zoltán Valentovič (for development and foreign relations) and Ján Reken (for the bachelor studies, rigorous procedure and lifelong education). The new-created Academic senate of the Faculty of Law of UMB elected P. Kandráč as a dean of the faculty on 1st July 1996. The dean has made the leading management, that means, he confirmed vice-deans and leaders of the departments in their functions. The management of faculty secured the accreditation for the bachelor and master studies at Law School of UMB, which obtained the authorization for realizing the state rigorous exams and also the doctoral study in the chosen scientific branches.

This management of the Faculty of Law remained after the following election into the academic senate after the finishing of the first term of their function, that means, it was leading and securing all of the functions and tasks that result from the faculty programmes of study. On 31st March 2002, the dean P. Kandráč left his office for the social-political practice. Then, the Academic senate elected Július Kováč as a dean of the faculty on 9th April 2002. In May 2004, J. Kováč gave up his function as a dean of the faculty. Pavel Kypta, the vice-dean for education, was given a mandate for executing this office until the new elections of the dean. On 13th July 2004, Mojmír Mamojka was elected by the unanimous consent of the Academic Senate as a dean of the Faculty of Law of UMB. The new dean of the faculty appointed Anton Dulák and J. Cirák as vice – deans and J. Straka and P. Vojčík as two advisers of the dean. The exceptional importance was aimed at the accreditation of the faculty. With the acceptance of the recreational file, the Faculty of Law of UMB (in December 2004) received the accreditation for bachelor and master studies and obtained the possibility for realizing the state rigorous exams again, and also the grant for the right on a doctoral study in branches such as Theory and History of State and Law and  Business and Financial Law. The new management reopened also the publication of the faculty manual with a great deal of J. Chovanec - the former chairman of the Editorial commission.

After Mojmír Mamojka having left his office, there were new dean elections on 16th October 2006. Stanislav Mráz was elected by Academic senate as a dean of the faculty.

Until the next elections into the Academic Senate at the beginning of 2011, the leading management of the Faculty of Law has consisted of these persons: S. Mráz – the dean of the faculty; P. Kypta – the vice-dean for education; Soňa Kubincová – the vice-dean for science and research; Anna Schneiderová – the vice-dean for international relations and development; Julita Baboľová – the secretary for economic, administrative, economical field and also for the sphere of salaries and human sources. These named persons remained in their functions also after the new elections and are part of the present management of the faculty.

At the beginning of 2011, Stanislav Mráz was holding his office as a dean of the faculty after being reelected by the Academic Senate of the Law School. The vice-deans were: Pavel Kypta – for education; Ján Cuper – for science, research and doctoral studies and Anna Schneiderová – for international relations and development. The secretary of the faculty is J. Baboľová.

In May 2014, Mojmír Mamojka was elected again by the unanimous consent of the Academic Senate as a dean of the Faculty of Law of UMB. His leading team of managers consists of these members: Vladimír Čečot as a vice dean for science, research and rigorous procedure; Ivana Šošková as a vice dean for education and Michal Turošík as a vice dean for international relations, doctoral studies and legislation.